The western United States receives precipitation predominantly during the cold season when storms approach from the Pacific Ocean. The snowpack that accumulates during winter storms provides about 70-90 percent of water supply for the region. Understanding and modeling the fundamental processes that govern the large precipitation variability and extremes in the western U.S. is a critical test for the ability of climate models to predict the regional water cycle, including floods and droughts. Two elements of significant importance in predicting precipitation variability in the western U.S. are atmospheric rivers and aerosols. Atmospheric rivers (ARs) are narrow bands of enhanced water vapor associated with the warm sector of extratropical cyclones over the Pacific and Atlantic oceans. Because of the large lower-tropospheric water vapor content, strong atmospheric winds, and neutral moist static stability, some ARs can produce heavy precipitation by orographic enhancement during landfall on the U.S. West Coast. While ARs are responsible for a large fraction of heavy precipitation in that region during winter, much of the rest of the orographic precipitation occurs in post-frontal clouds, which are typically quite shallow, with tops just high enough to pass the mountain barrier. Such clouds are inherently quite susceptible to aerosol effects on both warm rain and ice precipitation-forming processes.

This campaign consisted of the deployment of the ARM Mobile Facility 2 (AMF2) and the ARM Aerial Facility (AAF) Gulfstream-1 aircraft in a field campaign called ARM Cloud Aerosol Precipitation Experiment (ACAPEX), which took place in conjunction with CalWater 2, a NOAA field campaign. The joint CalWater 2/ACAPEX field campaign aimed to improve understanding and modeling of large-scale dynamics and cloud and precipitation processes associated with ARs and aerosol-cloud interactions that influence precipitation variability and extremes in the western U.S. The observational strategy consisted of the use of land and offshore assets to monitor:

The AMF2 was deployed on a research vessel offshore and provided critical measurements to quantify the moisture budget and cloud and precipitation processes associated with ARs and to characterize aerosols and aerosol-cloud-precipitation interactions associated with aerosols from long-range transport in the Pacific Ocean. The G-1 probed the clouds that form over the ocean and their transformations upon landfall as well as the orographic effects over the coastal range and the Sierra Nevada. The G-1 flights provided the critical information needed for comparing the simulated and observed processes of the vertical profiles of cloud microstructure and the resultant precipitation initiation and glaciation. This allowed the development and validation of more realistic simulations that replicated the aircraft measurements and thus quantify more reliably the entities that cannot be obtained directly by the aircraft measurements to improve understanding and modeling of aerosol-cloud-precipitation interactions. ARM Operational Periods: ARM Mobile Facility 2: 2015.01.12—2015.02.12 ARM Aerial Facility: 2015.01.02—2015.02.27

The NOAA research vessel Ronald H. Brown, above, played host to the AMF2 for ACAPEX. The G-1 returned to McClellan Airfield in Sacramento, California, for flights over the Sierra Nevada and Pacific Ocean. 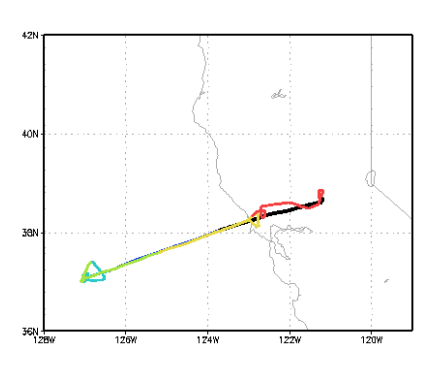 Diagram of the G-1's flight-plan over the Sierra Nevada and Pacific Ocean.

The CalWater2/ACAPEX observational strategy is to use high- and low-altitude aircraft, a ship with the AMF2 and a ground-based network.