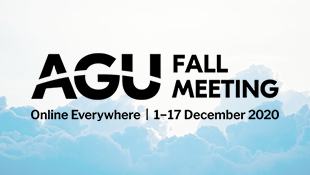 For two and a half weeks, the 2020 American Geophysical Union (AGU) Fall Meeting had people glued to their computer screens.

Because of the COVID-19 pandemic, the meeting—typically a weeklong event in person—moved online and stretched from December 1 to 17 to accommodate the amount of content and varied time zones of the attendees.

People around the world logged on each day at all hours to view oral presentations and posters, participate in chats, visit exhibitor booths, and soak in as much of the virtual AGU experience as possible.

Even in a virtual environment, the world’s largest earth and space science meeting lived up to its reputation. AGU reported that more than 25,000 people from over 110 countries registered and that attendees viewed 585,000 assets—posters, oral presentations, and union and named lectures—during the meeting.

If you registered for AGU and missed a session, presentations and recordings are available to view through February 15, 2021 (log in to the AGU virtual platform). You can also check out a list of almost 150 oral presentations and posters related to data from the Atmospheric Radiation Measurement (ARM) user facility.

About two months after the conclusion of the Multidisciplinary Drifting Observatory for the Study of Arctic Climate (MOSAiC) expedition, groups of researchers presented preliminary findings at AGU.

In September 2019, the expedition commenced on a German research icebreaker to document the atmosphere, sea ice, ocean, biogeochemistry, and ecosystem in the central Arctic over a full year. ARM provided more than 50 instruments for MOSAiC.

A related poster session on the 14th explored topics such as ice-nucleating particles, aerosol number concentration, and the structure and evolution of arctic cyclones.

Matthew Shupe, a co-coordinator of MOSAiC and a senior research scientist with the Cooperative Institute for Research in Environmental Sciences, was the primary convener of all three sessions.

A researcher supported by the U.S. Department of Energy’s (DOE) Atmospheric System Research, Shupe also presented a poster about cloud influences on the surface energy budget.

“MOSAiC represents the most comprehensive set of observations ever made in the central Arctic,” Shupe said during the press conference. “There’s a tremendous data legacy that will feed the arctic research community for years.”

Around the World, ARM Style

Besides MOSAiC, there were clusters of AGU presentations on ARM field campaigns such as Aerosol and Cloud Experiments in the Eastern North Atlantic (ACE-ENA) and Cloud, Aerosol, and Complex Terrain Interactions (CACTI).

Varble also said that cell formation often occurred along the eastern slope of the Sierras de Córdoba mountain range during the day, but researchers saw a surprising shift to the western slope overnight.

During an ACE-ENA talk December 9, Peiwen Wang of Stony Brook University in New York shared results of the micro-spectroscopic analysis of ground and airborne samples of ice-nucleating particles and other aerosols.

A December 14 oral session included ACE-ENA presentations from Xiquan Dong of the University of Arizona and Qiuxuan Zheng of Rutgers University. Both presentations addressed retrievals during the summer 2017 and winter 2018 campaign in the Azores.

Other ARM-related presentations examined topics such as the seasonal influence on wind energy in the Southern Great Plains, relationships between environmental variables and cloud properties in the Northern and Southern hemispheres, and the upcoming TRacking Aerosol Convection interactions ExpeRiment (TRACER) in Texas.

Read the AGU Scoop blog for more on these and other presentations.

Day One of AGU featured a town hall on collaborating with ARM and other DOE scientific user facilities. The town hall included a presentation from Paquita Zuidema, principal investigator for ARM’s 2016–2017 Layered Atlantic Smoke Interactions with Clouds (LASIC) campaign on Ascension Island.

Zuidema, a professor at the University of Miami and a member of ARM’s User Executive Committee, shared her tips for preparing a successful proposal. Her tips included reviewing facility documents, such as white papers, to understand how ARM observations could help you with your science.

The next day, a town hall on the upcoming deployment of the third ARM Mobile Facility (AMF3) to the Southeastern United States covered science drivers, siting considerations, instrumentation, and outreach to possible collaborators.

A shortlist of candidate sites for the AMF3 move is expected to be compiled by March 2021. Chongai Kuang, the AMF3 site science team lead from Brookhaven National Laboratory in New York, said the team would continue to seek feedback from the scientific community even with the shortlist in hand.

The SAIL campaign is scheduled to go from September 2021 to June 2023.

Read more about the researchers and their awards in this article.