In conjunction with other scientific activities taking place during International Polar Year 2007-2008, today an international research team begins a three-week field campaign in Barrow, Alaska. The experiment, which is sponsored by the U.S. Department of Energy’s Atmospheric Radiation Measurement (ARM) Climate Research Facility, uses a new suite of sophisticated instruments to provide the first simultaneous high-resolution dataset of Arctic clear sky and cirrus cloud properties in the far-infrared. This information will provide more accurate measurements about atmospheric properties in the Arctic to improve computer models that simulate Arctic climate. 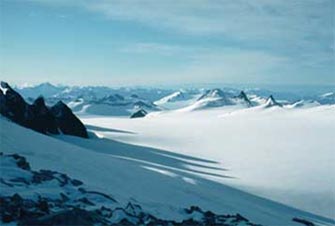 Scientists will use two state-of-the-art infrared Fourier transform spectrometers—highly sophisticated instruments that measure light intensity with high spectral resolution—to obtain atmospheric measurements in the far-infrared portion, or band, of the electromagnetic spectrum. Visible light, or what we see as the color band, occurs between 0.4 and 0.7 microns; the far-infrared band occurs at wavelengths longer than 15 microns.

“The relatively recent development of new state-of-the-art infrared interferometers, which measure downwelling radiance in this spectral region, as well as a new generation of very sensitive microwave radiometers to measure the total amount of water vapor overhead, allow the uncertainties in the radiative transfer models in the far-infrared to be evaluated and addressed,” said David Turner, a researcher at the University Wisconsin and the lead scientist of the study for the campaign.

Spectral bands in the infrared are largely underexplored because they are normally blocked from the view of surface instrumentation. This is due to strong absorption by water vapor, which makes the atmosphere look opaque in the far infrared. However, these bands become semi-transparent in very low water vapor conditions. The far infrared band between 15 and 30 microns is referred to as the “Arctic window” because it “opens up” in the low water vapor conditions that are prevalent at high latitudes.

Radiative cooling and heating effects in Earth’s atmosphere contribute significantly to the complex physical processes that regulate, or balance, Earth’s climate. Absorption of radiation by water vapor in the far-infrared band is responsible for the majority of the cooling that occurs in the middle and upper troposphere—between 4 and 9 miles above the Earth’s surface. However, accurate measurements in the far-infrared have been limited by the lack of accurate instrumentation to measure these radiances, plus the fact that the Arctic window is opaque, or “closed,” at most surface observation locations.

In addition to the infrared interferometers, three state-of-the-art millimeter wavelength radiometers will obtain measurements of the total amount of water vapor in the atmosphere. This information is critical for scientists to calculate the amount of infrared energy reaching the surface during the experiment. These calculations will then be compared against the observations made by the interferometers; good agreement is achieved only if the interferometer observations, water vapor amounts, and the radiative transfer model used in the calculation are accurate and consistent.

Routine measurements from a host of other instruments at the ARM Climate Research Facility in Barrow will also supplement the dataset, providing key information about the amount of energy emitted from cirrus clouds in the far infrared. Data obtained during this study, called the Radiative Heating in Unexplored Bands Campaign, will provide the needed measurements to improve and validate radiative transfer models used in climate change research.

The ARM Climate Research Facility is a national user facility that consists of heavily instrumented field sites around the world for conducting research related to Earth systems and the effects of human interactions on these systems, as well as the resulting data archive. Pacific Northwest National Laboratory oversees the engineering and integrated financial planning of the $31 million (FY06) ARM infrastructure, located at numerous sites around the globe and operated by national laboratory partners. Key responsibilities include assuring that user requirements are met and that science proposed by users is consistent with the user facility mission.

For more information about ARM science and the ARM Climate Research Facility, visit the ARM website at www.arm.gov.

For more information about the International Polar Year, see www.us-ipy.gov.