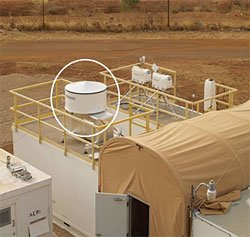 A W-band ARM Cloud Radar (WACR) recently joined the suite of baseline capabilities offered by the ARM Mobile Facility (AMF). The term “W-band” refers to the specific radio frequency range of this radar, which is a 95 gigahertz pulse Doppler zenith pointing radar, providing profiles of cloud reflectivity and particle velocity. In mid-March, the WACR was installed at the AMF site in Niamey, Niger, and became operational on March 18, 2006. The WACR developed for the AMF is one of the most sensitive cloud radars in the world, and is an essential instrument to understanding cloud dynamics as part of the Radiative Divergence using ARM Mobile Facility, GERB data and AMMA Stations” (RADAGAST) field campaign. Along with characterizing the clouds during the summer monsoon season, the WACR will record the precursor activity in the “dust season” prior to the onset of the monsoons. 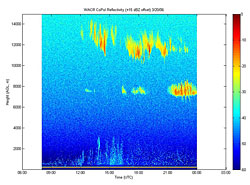 Successfully building a reliable radar capable of operating in the extreme environments expected for the diverse AMF deployments was an engineering challenge. In addition, the design for mobile application as a stand-alone system required as small a footprint as possible. This is the second operational 95 GHz cloud radar developed by ProSensing, Inc. for the ARM Program. The first was fielded at the ARM Southern Great Plains site in Oklahoma in 2005. Due to its larger antenna, the WACR designed for the AMF is significantly more sensitive than the first model.