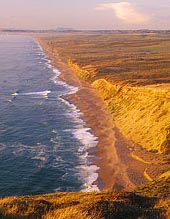 Point Reyes National Seashore, on the California coast north of San Francisco, has been identified as the official location for the first deployment of the DOE’s Atmospheric Radiation Measurement (ARM) Mobile Facility (AMF). As part of a 6-month field campaign beginning in March 2005 to study the microphysical characteristics of marine stratus and, in particular, marine stratus drizzle processes, the AMF will provide a mature instrument system to help fill information gaps in the existing limited surveys of marine stratus microphysical structure. Marine stratus clouds are known to be susceptible to the byproducts of fossil fuel consumption, a multi-agency climate change priority.

Extensive sheets of stratus and stratocumulus clouds over the world’s oceans are known to be an important component of global cloud forcing as they exert a large-scale cooling effect on the ocean surface. Increases in anthropogenic (manmade) sources of cloud condensation nuclei (microscopic aerosol particles that serve as collection points for liquid water) can increase the “reflectivity” of the clouds by decreasing the size of cloud droplets. Increasing numbers of cloud condensation nuclei may be contributors to the reduced rate of drizzle produced by marine clouds. Despite an extensive body of modeling studies, these microphysical processes continue to be poorly understood from a quantitative perspective, particularly on a global scale.

In collaboration with the U.S. Office of Naval Research and DOE’s Atmospheric Science Program, the objectives of the Marine Stratus Radiation Aerosol and Drizzle project are to make observations of cloud aerosol interactions and to improve understanding of cloud organization that is often associated with patches of drizzle. At least two research aircraft will participate in the project. The AMF will contribute significantly to the scientific objectives of this project by providing state-of-the-art active and passive remote sensors to measure the detailed microphysical structure of drizzle patches and the associated clouds as they move onshore.

Point Reyes National Seashore was chosen due to its marine environment, as well as its accessibility for scientific research endeavors. This national park is home to the Pacific Coast Science and Learning Center, established by the San Francisco Bay Area Network of National Parks. The center provides office space, housing, data, reports, coordination and logistical support for researchers performing projects within Bay Area parks. ARM scientists met with National Parks Services (NPS) employees in November 2004 to tour the NPS facilities and design a lay out for the AMF instruments. The AMF will be located at an existing NPS facility less than one mile from the northwest-facing beach.