A key addition to the ARM Climate Research Facility scientific infrastructure is ready to roll…literally. In February, the ARM Mobile Facility (AMF) is being packed up and shipped from Richland, Washington, to the Point Reyes National Seashore north of San Francisco, California. There, it will be reassembled in preparation for its first deployment as part of a 6-month experiment to study the microphysical characteristics of marine stratus clouds, and in particular, marine stratus drizzle processes. Throughout the deployment, the AMF will accommodate aerosol observing equipment for National Oceanic and Atmospheric Administration (NOAA) researchers co-sponsored by ARM and the DOE Aerosol Science Program. Because similar equipment has been proposed as a future baseline AMF capability, this collaboration represents a prototype deployment with NOAA equipment. 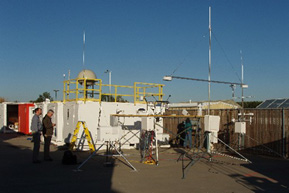 After a year of engineering design, procurement, and construction, beta testing of the AMF began on January 3, 2004, at DOE’s Pacific Northwest National Laboratory. During the test period, the ARM Climate Research Facility operations staff monitored the station during normal work hours. They also launched one RS-92 radiosonde per day, requiring local notices to be in place with the Federal Aviation Administration one hour prior to each launch. The beta test allows the ARM Climate Research Facility operations and engineering staff to ensure proper operation of the full complement of