NSA BC Loadings and Mixing State for MOSAiC

The arctic region is truly unique in the global climate change arena in that it exhibits pronounced sensitivity towards aerosol radiative forcing. So sensitive is this region that within the climate change community it is often compared to the canary in the coal mine as a forecaster of potential danger as evidenced by the decline in perennial sea-ice pack. Of the aerosol species that are expected to contribute to this aerosol forcing, black carbon (BC) is arguably at the top of the list. Black carbon owns this distinction because it exerts two radiative forcing influences that can be characterized as atmospheric and non-atmospheric. As an atmospheric forcer, BC behaves much as it does in the mid-latitudes — through the direct effect and semi-direct effects — collectively causing surface dimming with subsequent surface cooling and mid-altitude warming. As a terrestrial forcer, which is unique to the polar regions, the deposition of BC on the polar surface can readily decreases polar surface albedo that, in turn, can activate a positive feedback wherein the increased surface absorption leads to further snow melt, causing still further reduction in surface albedo.

The Multidisciplinary drifting Observatory for the Study of Arctic Climate (MOSAiC) field campaign, slated to begin in September, 2019, will entail interdisciplinary measurements in the atmosphere, sea ice, upper ocean, and biosphere in a concerted effort to better quantify and understand the rapid changes taking place in this region. In addition to the measurements conducted aboard an ice-breaker observatory, MOSAiC will also involve a distributed network of measurements across the Arctic Circle with the goal of acquiring data that can be used to characterize the spatial variability in this region on grid-box scales. As captured in the figure below, 12 sites have been identified (including the RV Polarstern observatory). 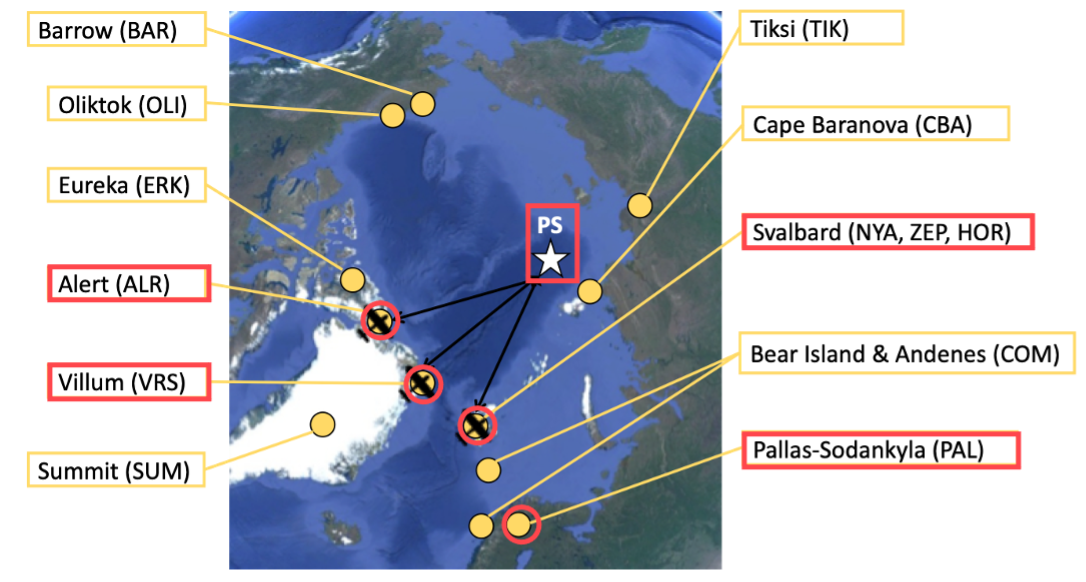 The deployment of a single-particle soot photometer (SP2) at Barrow, Alaskia, together with five other deployments of the SP2, will provide a spatial measurement coverage of refractory black carbon (rBC) in the Arctic that is unprecedented. Consistent with the other SP2 sites, a Barrow SP2 data set would provide rBC mass concentration times series, time-resolved size/mass distribution data, and, for events or time periods of interest, rBC-containing particle mixing state (e.g., coating-to-core mass ratio). Such spatial coverage provided by the network of SP2s will help MOSAiC meet its science objectives by providing the project spatially extensive measurements that will help enable the optimized use of grid-box scale models. The SP2 will be deployed from November 2019 to September 2020.