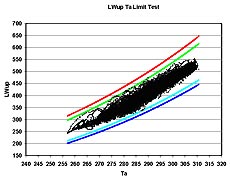 The QCRAD VAP has been developed to assess the data quality and enhance data continuity for the ARM radiation data collected at all ARM central and extended facilities. The QCRAD methodology uses climatological analyses of the surface radiation measurements to define reasonable limits for testing the data for unusual data values. The main assumption is that the majority of the measurements are “good” data, which for field sites operated with care, such as ARM’s, is a reasonable assumption. Data that fall outside the normal range of occurrences are labeled either “indeterminate” or “bad,” depending on how far outside the normal range the particular data reside. The methodology not only sets fairly standard maximum and minimum value limits, but includes many cross-comparisons based on what we have learned about how these instruments behave in the field in developing other VAPs such as the Diffuse IR Loss Correction VAP (Younkin and Long 2004) and the Best Estimate Flux VAP (Shi and Long 2002).

During operational processing, the QCRAD VAP applies a generic correction to the shortwave (SW) downwelling hemispheric flux to correct for infrared loss within the radiometer. On a yearly basis, a more detailed correction that uses fits derived for the specific instruments (rather than the generic correction) is applied. This correction will affect the output of the downwelling SW values for those occasions for which the sum of the direct plus diffuse SW is not available as the “best estimate” for downwelling SW. So that the user may easily tell whether this full correction has been applied, files that have had the full correction implemented are labeled as *.c2 and *.s2. Once the *.c2 and *.s2 files are available, they will replace the *.c1 and *.s1 files in the ARM Data Center.

In September 2011, an end-to-end reprocessing of the QCRAD datastreams was undertaken to:

The new version of the code is now being run in operational processing. All of the historical QCRAD data at all sites/facilities is being reprocessed, reviewed, and sent to the Data Center. The status of the reprocessing effort is available here.

Additional Information on the QCRAD VAP